Flatiron Apple-1 is listed in the Apple-1 Registry as #83.

History of the Flatiron Apple-1

Owned by Apple employee who worked at Flatiron building on Apple IIc. It is an original and working Apple-1 from 2nd production run (2nd batch).

It was on display at the VCF West 2019 (Vintage Computer Festival) at the CHM (Computer History Museum, Mountainview, California / USA).

In March 2019 Bonhams offered again an Apple-1 for auction. I was abroad at lunch with my girlfriend in Bogota, Colombia. My phone rang and I had to bid on the phone outside in a noisy road. After bidding and waiting a longer time the man on the phone told me, that the lot passed. I had to ask "did I won?" The answer was "yes".
The auction was again announced relatively shortly before the auction started and probably not many people knew about it. Again, you had to know, that Bonhams usually auction off at this time technical stuff.
The computer was delivered door to door to my home early June. It was inside a wooden box made for the Apple-1 and secured by many screws. It is now in a bank safe deposit box. 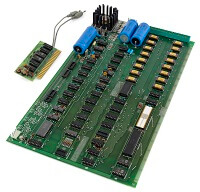