The Copson Apple-1 is listed in the Apple-1 Registry as #31.

History of the Copson Apple-1 - Copson Who? 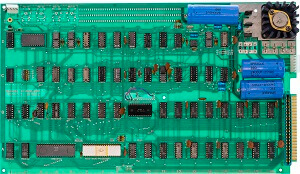 It is an original and working Apple-1 computer from the 1st batch. Because not all Apple-1 have a serial number, the name of the first owner is usually used for identification. For 36 years, the Copson Apple-1 was in the hands of its first owner, Joey Copson, a talented former employee of Apple who worked as a senior software engineer that had previously worked at Atari and Cray Supercomputers.

He was the programmer of Star Raiders for Atari 5200. Some call it the second most important game of all time.

He bought the Apple-1 in San Jose directly from the Byte Shop, a young computer shop which was the first one to offer an Apple computer. The first 50 Apple-1 were sold there.

The Copson Apple-1 is definitely one of the very first examples.

When Apple offered the owners of Apple-1 an exchange for their computer in 1977, Joey Copson reportedly said "No, I'm not going to. I don't care, I'm keeping the Apple-1". A stroke of luck, since many Apple-1 that ended up with Apple were scrapped, except for the units that employees were allowed to take with them as souvenirs.

Joey Copson had been storing the Apple-1 in his mother's closet for all these years.

He served in the Vietnam War before he joined Apple and died on March 5th, 2003.

Bob Luther, the author of the book "The First Apple", bought the computer after Joe Copson died. In 2015, the rare unit changed hands for the last time at an auction. The Copson Apple-1 is on loan at the Deutsches Museum in Munich since November 2017.

On the back is the serial number 01-0022 handwritten by Steve Jobs.

The general condition is excellent and the original parts are also in good condition.

As usual, the processor is an MCS 6502 in the much sought-after white ceramic version. Corey Cohen, who has inspected many Apple-1.

The Apple-1 is fully functional, which doesn't happen so often. Corey Cohen switched on the computer in 2015 for the last time, which is recorded on video.

The owner has not made any modifications and, apart from the expected ageing, the Apple-1 still looks like new. The dust was deliberately not removed.

The number 01-0022 is handwritten on the back of the Apple-1. There are many theories about this apparent serial number. The Apple-1 which went to the Henry Ford Museum for over US$ 900,000 US$ has the number 01-0070 and many other Apple-1 have no number at all. No one can say who wrote these numbers on the boards and for what.

There is also a round punch with the number 7 on the back of the board.

The sale of Apple-1 computers to Data Domain Computers by the Byte Shop explains the higher numbers quite well.

In any case, there are computers whose handwritten number is greater than 50, but were still sold by The Byte Shop. That is not a contradiction because when the Apple-1 were sold to Data Domain Computers, probably just a few were taken out of stock. Why would anyone pay attention to the ascending order of the numbers?

The optional cassette interface is also available in the original.

A look at Mike Willegal's Apple-1 Registry shows that this computer is something special. In this list, the Copson is #31, an arbitrary numbering.

Apple-1 were normally delivered without the case, what was not unusual. The buyers decided if they wanted to look for a case. Later, there was a manufacturer of wooden cases, which were sold to only a few costumers.

Even later, The Byte Shop also started offering wooden cases. Most of the first 50 Apple-1, group that Copson's computer belongs to, haven't got a case. Copson Apple-1's case is absolutely unique. It looks like a clam shell and stems from 1976 with original Datanetics ASCII keyboard from June 2nd of that year. It is truly the product of a hobby work and is full of retro charm. The mainboard and power supply fit into the case together with the Datanetics keyboard.

In 2015, Corey Cohen completely cleaned and tested the keyboard.

A monitor and a cassette recorder were part of the eBay auction.

In 2015, an Apple-1 appeared on eBay and I saw this auction by chance. A real Apple-1? I couldn't believe it at first. For many collectors, finding such a historical unit in a very good condition is like finding the holy grail!

Part of the auction proceeds are transferred to an organization that helps victims of ALS, disease of an employee of Bob Luther

The decision to bid:


After the purchase, I saw no reason to go public. Inquiries about interviews were rejected and Bob Luther did not reveal the name of the buyer. The computer was later to be handed over to a museum, but my name was accidentally sent to the press in 2017, what made contact with other collectors possible.

The Apple-1 was picked up by me directly from Bob Luther in Alexandria/Virginia. Bob took me to the airport to clarify some details. I had already asked the airline and airport security if there were any objections for the computer and the monitor being to be carried along.

Security at Dulles Airport was no surprise. Everything went very nicely and professionally.

Months before the handover, I had already asked the customs authorities and talked to a very nice lady from Berlin, who is often entrusted with rare collector's items.

According to her, the customs authorities had issued a document on behalf of the European Union on July 3rd, 2015.

Quote: The commodity [sic] is to be classified as a "collector's item of historical/technological value".
(Reason for sic: The Copson Apple-1 is called like this by them and subsequently referred to this name on the document)

After landing in Frankfurt, no one was at the gates from customs, that could only be contacted by telephone. I was picked up and asked casually whether the way was worthwhile and if the object to be imported was worth more than 1,000€.

I had to pay the import sales tax in cash. The customs officers were helpful and understanding. It was clear that I didn't want to leave the device at the customs office to come back to Frankfurt later. It took a while and some paperwork had to be done. After a few hours on site, I was able to take the Apple-1 with me.

I was allowed to transfer the money, but the computer had to be sealed in a transport case. It would have been strange if someone had volunteered to declare something for customs clearance and then refused to pay. This seal was only allowed to be removed after written confirmation of the receipt of the money by customs.

The computer was correctly introduced and the import sales tax was paid.

In the Cologne area, I got hold of the last available locker in the appropriate size.

On November 8th, 2017, the Copson Apple-1 was freed from its dark prison in a Cologne bank and, on November 13th, it made its last trip to the German Museum in Munich.

There are no plans for how long the computer will stay in the museum, but it should be a few years.

Some press articles you can find in the link section.

Shortly after the purchase, the idea to hand over the Apple-1 to a museum for exhibition came about. At first, the Apple-1 disappeared like so many other devices in a bank safe.

I felt that many computer enthusiasts, not only fans of the Apple brand, would like to see an original Apple-1. In Germany, this was previously only possible in one museum: The Nixdorf museum (very friendly curator by the way). There are many good replicas nowadays, but, as with all historical objects, it is different to stand in front of a replica. Authenticity simply inspires.

Not only for collectors, but also for many technically interested people, Apple-1 is considered the Holy Grail when it comes to microcomputers.

In 2015, I wrote to the Deutsches Museum in Munich and offered the Apple-1 as a free of charge loan to the exhibition.

The Deutsches Museum was my first choice, although there were many other museums, mainly from the USA. The German Museum Munich is the world's largest natural science museum. As a teenager, I often stayed with my grandmother in the beautiful city of Munich for a few weeks and visited the Deutsches Museum again and again. The museum is a paradise for all technology enthusiasts. This youthful enthusiasm for the museum and the high number of visitors was ultimately decisive.

I am pleased, that a large number of visitors can now see a very beautiful computer with one of the most unusual cases from 1976.

It took almost two years, until the Apple-1 was on display. Curator Anja Teuner prepared from 2015 to 2017 everything for the handover. Thanks for all her efforts!

The handover took place on 14th November 2017 with the Zuse 4 in the background. This is exactly where Steve Jobs personally handed over a Macintosh to the museum in 1985.
Many reporters and Curator Anja Teuner.

From December 2017 on, the Apple-1 will be permanently on display in the Microelectronics Department.

Why the German Museum in Munich? There were some museums interested in the Apple-1. The Deutsches Museum Munch is not only the largest technical museum, but it has impressed me since my childhood. My grandmother owned a house at the English Garden in Munich and I used to go from there to the museum and the nearby astronomical observatory. A little nostalgia and childhood memories played a role.

Only very few Apple-1 have been on display in European museums so far.

Many questions regarding the loan of the Apple-1 to the museum revolve around money. Nothing has been and will be paid for the loan. The delivery was also paid by the lender. Museums are not the meeting place for speculators. If you want to earn money with a computer, you should contact the auction houses. Museums accept donations for objects, but they are also not a recycling center. The object must be interesting for the museum, the space must be available... Rarely will an object be accepted as a loan, since the expenses for museums are enormous. There are many people who would like to see an original Apple-1. I definitely wanted it to be exhibited for this audience. If I wanted to sell everything, the computer would have been auctioned off. Enormous amounts have already been offered. 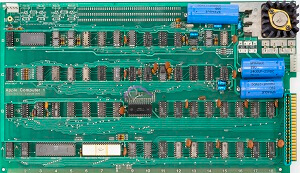 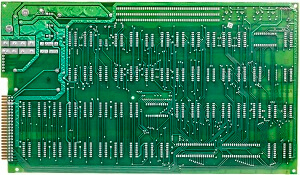 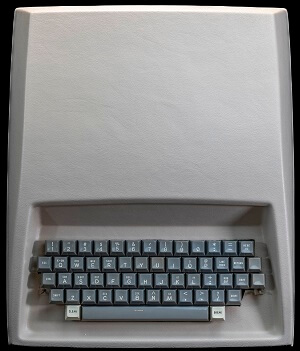 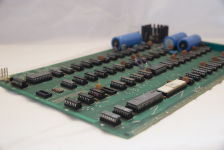 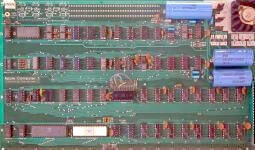 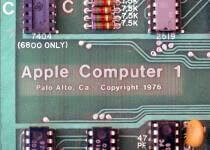 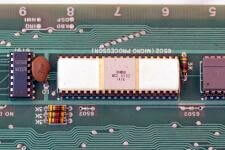 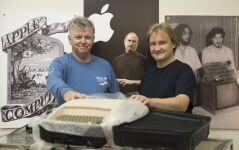 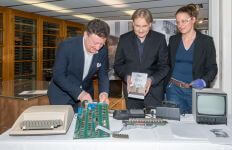 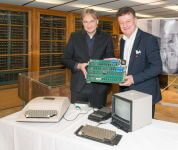 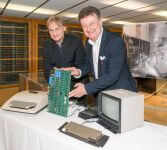 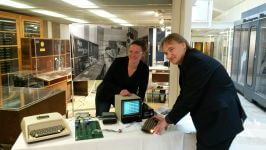 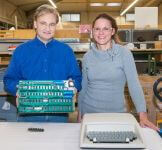 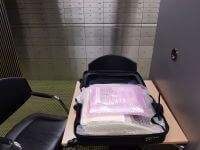 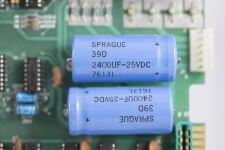 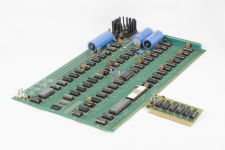 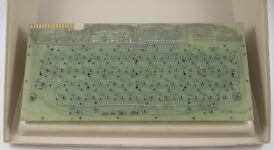 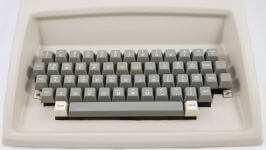 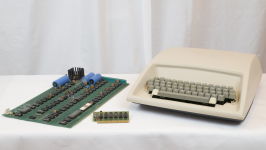 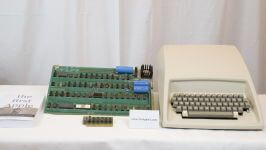 + Dedication of Bob Luther in his book ‘The first Apple’ Dedication 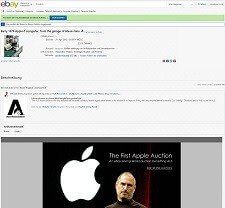 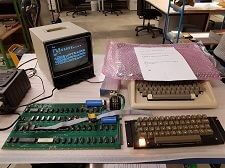 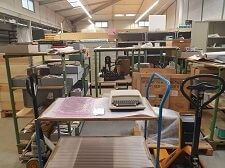 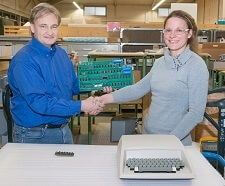 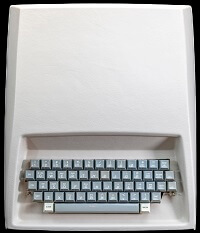 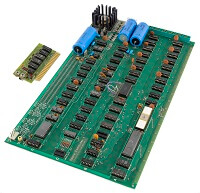